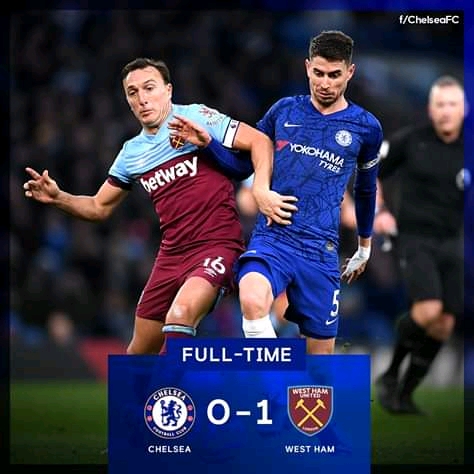 West Ham relieved the pressure on boss Manuel Pellegrini as they ended their seven-game winless run with a first victory at Chelsea for 17 years.

Aaron Cresswell scored the winner three minutes after the break as he cut inside and fired low past Kepa Arrizabalaga.

Chelsea had plenty of chances early on as Christian Pulisic missed the target from a few yards out. The American also wasted a great opportunity late on.

But Pellegrini was rewarded for picking David Martin in goal instead of Roberto as his side held firm under late pressure.

It proved an inspired choice as Martin, whose father Alvin is a West Ham legend, made several good saves to keep a clean sheet on his West Ham and Premier League debut.

The Hammers also thought they had gone 2-0 up after 71 minutes, but Michail Antonio’s goal was
ruled out for handball.

However, the day belonged to Martin, who was close to tears at the end of the game and ran into
the stands to greet his father,

who played in the West Ham defence for 20 years.