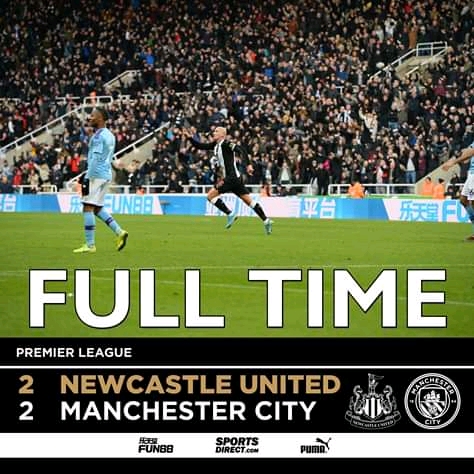 Kevin de Bruyne’s equally brilliant strike from the edge of the box appeared to have salvaged victory for Pep Guardiola’s side with eight minutes left.David Silva’s clever, backheeled pass had allowed Raheem Sterling to curl in the visitors’ opener after 22 minutes.But Newcastle levelled three minutes later when left-back Jetro Willems linked up with Miguel Almiron before firing in.Pep Guardiola’s side climb to second with their point, while Newcastle are up to 12th.Manchester City, who move above Leicester on goals scored, could fall 11 points behind leaders Liverpool should Jurgen Klopp’s side defeat
Brighton later on Saturday.