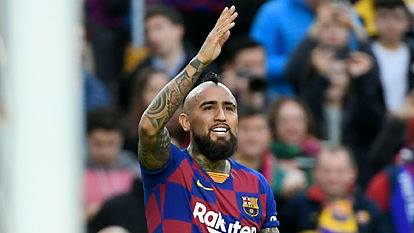 Barcelona midfielder, Arturo Vidal has taken a legal action against his Spanish club following the inability to pay his bonuses.

The Chilean international believes he is due for some certain bonuses, and claims the fee is around 2.4 million euros.

Barcelona didn’t accept the legal action, after they claim that Vidal has a bad interpretation of his own contract and might be trying to force a move out of the club.

Arturo Vidal joined Barcelona in August 3, 2018 on a three year contract for a fee around 19 Million Euros.

On 12 August 2018, the Chilean made his debut for the club after coming on as a substitute in a 2–1 victory over Sevilla to claim the 2018 Spanish Super Cup.

On 28 October, Vidal came on as a substitute in the 84th minute of El Clasico.

Three minutes later, Vidal scored his first ever goal for Barcelona
to cap off a 5–1 home win over rivals Real Madrid in La Liga.