It is the year of the number 13. For most people this is considered “unlucky,” and for others it is “lucky.” The

number 13 has many meanings and interpretations in different religions and cultures around the world. It is what you want it to be. 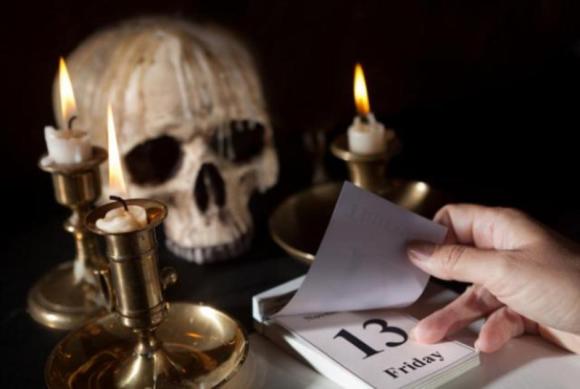 There are many connections with bad luck associated with the number 13, including the following:

Superstition has deemed the number 13 to be so unlucky that some buildings do not show a 13th floor option on the elevator.

The number 12 is often considered to connote completeness, which puts the number 13 out of balance.

On Friday The 13th, The Most Unlucky Day
Of The Year. Many people still believe that Friday
the 13th is a day of ill fortune and will not travel
or take up new ventures.
People don’t even dine in restaurants. According to
a study done by the North Carolina, Stress
Management Centre and Phobia Institute, about 17
to 21 million people suffer from the fear of Friday
the 13th in the US.

This fear or phobia is named as
friggatriskaidekaphobia. Here frigga is the name of
the Norse goddess for whom Friday is named and
triskaidekaphobia means fear of number thirteen.
It is also termed as paraskevidekatriaphobia,
where praskevi means Friday. The number thirteen
and the sixth day of the week Friday are
considered unlucky individually. Their combination
therefore is supposed to be the unluckiest of all.

How this fear originated is still a mystery. But
there are many guess works made.

theories associated with the number thirteen is that if thirteen people dine together one of them will die within a year.

This theory comes from the Last Supper. Jesus was dining with the 12 Apostles. Judas, who had
betrayed Jesus, came as the thirteenth guest.

Similar story is narrated from Northern Europe by
the Vikings from ancient times. According to a
Norse myth it is said that twelve Gods were dining
at Valhalla. Loki, the god of mischief entered without being
invited. His presence made the total number of
guests 13. Loki instigated the blind god of winter and darkness to kill Balder the Good with a spear and mistletoe.
Balder was killed instantly. He was the favorite of
all and all Valhalla mourned.

An associate policy scientist in the Mathematics
and Science Education Resource Center at the
University of Delaware in Newark, Thomas
Fernsler, said the number 13 suffers because of
its position after 12.

Why The number 12 is considered a complete number.

Therefore in exceeding 12 by 1, Fernsler said 13 is associated with bad luck as it is beyond
completeness.
The stories supporting the myth that Friday is unlucky are very few.

ate the poisonous fruit on Friday.

There are many other stories which say that the thirteenth day of the month and Friday had
been an unlucky day.

The origin of the superstition is still a mystery. Many attempts have been made to prove that
Friday the Thirteenth like any other day is a normal day but people still believe that this day is there to bring bad luck.

There are 12 king Arthur’s knight, 12 major constellations, 12 apostles, 12 months but no one used 13. And if there will be, something strange will happen. But why? We are told that 13 represents an omen and brings you nothing but bad luck This includes the date “ Friday the 13th”, 13th floor , “ 13 crew” and many more. Number 13 conveys a message to humanity and the message is a great mystery.

The Nights Templar
On Friday, October 13th, 1307, the “pre-dawn raid”
arised. Knights Templar were arrested and
condemned by the seneschals of Philippe IV, King
of France.
Hangman’s knot
A well-known knot most often associated with its
use in hanging a person. In tradition, it contains 13
turns . The more turns creates more friction that
make it hard to pull. This will result to breaking
the neck and inhuman death.
Norse legend
There are 12 gods sitting down to a banquet while
the 13th god, Loki was uninvited. Loki killed one
of the other gods, which led to events that
eventually resulted in Ragnarok — the death of a
bunch of gods, a slew of natural disasters, and the
eradication of everything on earth save for two
human survivors.

The death
tarot card
sits at
number 13.
The Death
card depicts
a skeleton
riding a
horse.
Surrounding
it are dead
and dying
people from
all classes,
including
kings,
bishops and
commoners

13th Member of the Last Supper

In Christianity, the Last Supper had thirteen
attendants. That time, Jesus Christ revealed that
one of the guests would betray him. And it was
true; He is Judas Iscariot, the one who turned
Jesus over to the Romans. This tragedy led to the
crucifixion of Jesus.

Legend says that Judas sat at the thirteenth place
at the Last Supper’s table. As a result of this
betrayal, the number 13 has maintained a bad
reputation and has a superstitious characteristic in
Christian culture.

Judas regrets his betrayal and tries to reverse his
actions by returning the money, but it is too late.
Judas then goes out and hangs himself (Matthew 27:3-10; Acts 1:15-19).

So how could we understand the connection of these five stories?
What is the relevance of Nights of Templar, Hangman’s knot, Norse Legend, Death Tarot card
and Judas in the Last Supper?
Mystery goes deep and becomes more confusing than before.

Norse legend has 13 gods and looks like representing the 13 members of the last supper.
Loki depicts someone who will cause chaoses.
Judas hanged himself with the “Hangman’s knot”
that led to his tragic death. This time, we can get
the card of “Death Tarot”.
Knights of Templar have something very
confidential that no one must ever know. It came
to a point that they sacrifice their lives just to
protect this secret. So what is this all about?

When Number Thirteen was considered Good

Once it was held to be a holy number but its popularity declined when older religions vanished into history
1. In ancient Greece Zeus was counted as the thirteenth, and most powerful god
2. An Aztec week lasted for thirteen days called a Trecena. There were twenty weeks in a year and the
thirteenth was ruled by the goddess Tlazolteotl, a friendly lady who forgave sins of an adulterous nature.

3. In Egypt, there are thirteen steps upon the ladder that leads to eternity. Upon the thirteenth step it is said the
soul reaches the source of itself and attains spiritual completion.

When was Number 13 supposed to be unlucky?

Nobody likes an uninvited guest.
Being left of the invitation list can enrage fairy godmothers into cursing a child with the fear of sewing needles and a propensity for endless sleep or,
even worse. Just look at what Eris, Goddess of Discord, achieved when she
hurled a golden apple into a wedding reception. The end result of that was the Trojan War!
Another tragedy with an uninvited guest occurred in Valhalla(wahala)

As great Norse feast was held for Baldur the Beautiful. There were twelve Norse gods invited but Loki (the trickster)

turned up too. The next day Baldur was dead, slain unwittingly by a spear
belonging to that thirteenth uninvited
guest- a spear tipped with mistletoe.

The number of steps in a gallows is Thirteen

Can you understand this?
To be truthful, mathematics is not my
thing. It’s nowhere near my thing.

qualities of number thirteen
1. It’s the sixth prime number – a
number which can only be divided by
itself and the number 1.
2. It’s the smallest emirp number.
Before you roll your eyes, an emirp
(‘prime’ spelled backwards) is a prime
number which, when reversed, remains a
prime number.
3. It’s a Fibonacci number

The Number 13 isn’t quite so sinister
when you look at it in a numerology
chart. While it doesn’t necessarily mean
bad luck, when it’s located in key
positions it does indicate immaturity,
irresponsibility, laziness, idleness, lack
of seriousness, and low vitality.

However, in most numerology readings
all numbers are reduced to a single digit. So the Number 13 would be 1 + 3 = 4.
If your Life Path number is a 4, it
signifies that you’re a homebody and you have lots of ideas. You like to be
organized and, in your home, everything
has its rightful place.

If your Attitude Number is a 4 it means
you’re very quiet and you’re a list maker. You always know what’s going on around you and you’re an excellent
teacher.

What do you think about Friday the
13th?
Do you call off sick at work on Friday
the 13th? Or do you boldly tempt fate
and venture forth?
Triskaidekaphobia , the fear of the
number 13 is silly enough, but
friggatriskaidekaphobia is laughable.
What a mad mixture of languages to
make one nine syllable word!